Chief  Forwarder Tochukwu Ezisi popularly known as Akuyienwataegwu has on Wednesday emerged the new National President of the foremost freight forwarding group in Nigeria, the Association of Government Approved Freight Forwarders (NAGAFF). Even as he has promised to bequeath a benefiting National Secretariat to the Association in two years.

Chief Ezisi was openly declared the New President of NAGAFF by the founder of NAGAFF, Dr.Boniface Okechukwu Aniebonam, during Ezisi’s birthday celebration at NAGAFF headquarters on Wednesday.

The celebrant who was in a very happy mood hosted the membership of NAGAFF to a lavish party amidst funfair. 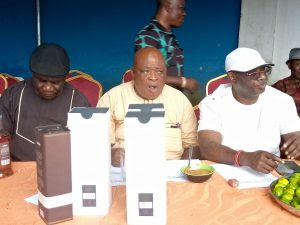 Midway into the party after the host had cut his birthday cake, the elated Founder of NAGAFF, Dr. B.O Aniebonam, seized the microphone to announce the dissolution of Dr. Increase Uche led  National Executive Council (NECOM) and subsequently declared the philanthropist and astute businessman as the new president of the Association.

The announcement triggered a thunderous ovation as respective members of NAGAFF took their turns to eulogize the person of Ezisi; as well as pledged their support to his administration.

Fwdr. Chief Tochukwu Ezisi is former member of Council for the Regulation of Freight Forwarding in Nigeria-CRFFN, Governing Board, and is also seeking reelection into the Council as Board member in the forthcoming election. He has within few years shown much interest in the progress of the association and his efforts, no doubt, endeared him not only to the Founder but to the entire membership of the Association. 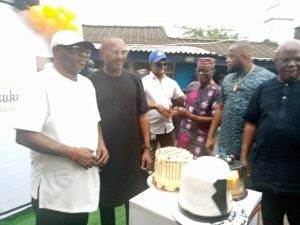 Nevertheless, the Founder, had at every NAGAFF organized forum expressed palpable fears of getting a capable and diligent member to take charge of the Association. And to the amazement of all, Ezisi got the exulted position as a birthday gift.

One of the members, and former Chairman of NAGAFF, Apapa Chapter, Dr Fred Ajuzie, at the event, pledged the support of NAGAFF Compliance Team to the new administration, but strongly cautioned the new president on betrayal, saying that the past administrations mindlessly betrayed the Association and its membership. He went ahead and told the new leader that his administration would be subjected to serious check so as to forestall abuse of the office.

However, the new president of NAGAFF, Mayor Tochukwu Ezisi, in his acceptance speech, promised to rebrand the Association and set it on the path of progress. He promised to move the Association’s headquarters to a permanent site within the next two years. Ezisi went further to canvass support from members, extending an olive branch to those who are not comfortable with his emergence as New President of NAGAFF; promising to carry everyone along as he assured an open door policy.

However, what remained a mystery is  whether Ezisi was given prior information on his new responsibility by NAGAFF High Command or it came to him as a birthday surprise.

Meanwhile, the Head of NAGAFF 100% Compliance Team, Alhaji Ibrahim Tanko, at the birthday venue, announced that his team would be hosting the new President, at Rockview Hotel and Suites, Apapa on Friday next week.