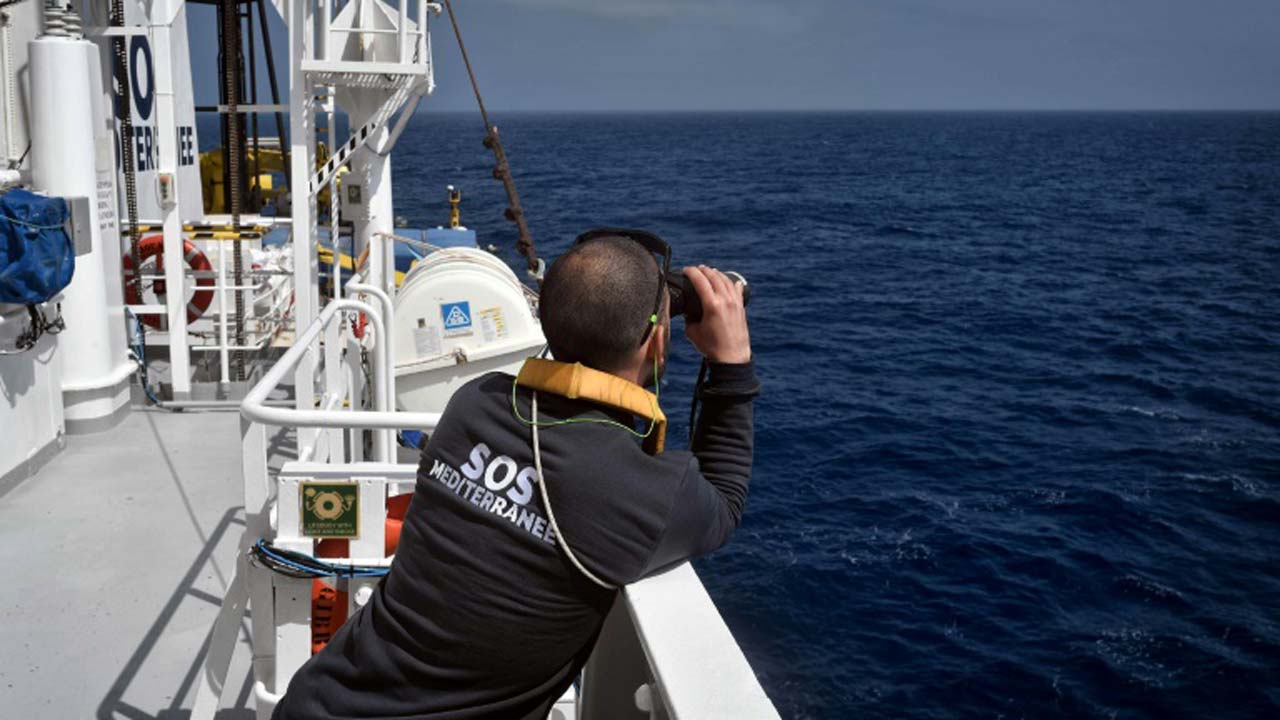 A member of SOS Mediterranee aboard the Aquarius off Libya in May 2018. AFP/File / LOUISA GOULIAMAKI

Malta on Sunday reiterated its refusal to open its ports to an NGO migrant rescue ship in the Mediterranean with hundreds of people on board, ignoring calls from Italy’s hardline interior minister to not “look the other way”.

Some 629 migrants were saved by SOS Mediterranee Saturday and are stuck aboard the French NGO’s ship Aquarius, which is currently between Malta and Sicily waiting for a secure port at which to dock.

Matteo Salvini, in a joint statement with Danilo Toninelli, minister in charge of the Italian coastguard, insisted that Malta “cannot continue to look the other way when it comes to respecting precise international conventions on the protection of human life.”

“That’s why we ask the government in Valletta to take in the Aquarius in order to offer first aid to the migrants on board,” the statement continued.

“As such Malta will not take the said vessel in its ports,” the statement continued.

In the meantime Conte said that Italy has sent two patrol ships with doctors on board “ready to intervene and ensure the health of anyone on board the Aquarius who might have the need”.

Speaking to AFP, a Maltese government spokesman insisted that the rescue of the migrants took place in the Libyan search and rescue area and was headed up by the rescue coordination centre in Rome, meaning Malta has no legal obligation to take in the migrants.

Anti-migrant rhetoric
Speaking to news channel Sky TG24, Aquarius crew member Alessandro Porro said that they were north of Malta and had “received no communications from the Maltese authorities”.

“The people we saved yesterday were in a difficult condition, at least 50 were at risk of drowning. We need to have an idea of what port to go to, something that up to now we haven’t had.”

The migrants were rescued by Aquarius in six separate night-time operations in the central Mediterranean on Saturday.

The French organisation said that among those saved and brought on board are 123 unaccompanied minors, 11 small children and seven pregnant women.

Italy’s spat with Malta began after its reported refusal to come to the aid of another rescue ship Seefuchs, which was stranded with 126 migrants on board due to violent seas until it was allowed to dock in the Sicilian port of Pozzallo on Saturday.

“If anyone thinks I won’t move a muscle while we have another summer of landings, landings and more landings, well that’s not what I’m going to do,” Salvini told reporters.

In the meantime some in Italy have offered to take in the migrants, with mayor of Taranto, Rinaldo Melucci, saying that the Calabrian port city was “ready to embrace every life in danger”.

“Our land has always been one of refuge, I don’t know how you can send away 629 human lives,” he added.

Mayor of Naples Luigi de Magistris said on Twitter that “if a minister without a heart leaves pregnant women, children, old people, human being to die, the port of Naples is ready to welcome them”.

Two-year deadlock
The same day Italian authorities held the migrant rescue boat Sea-Watch 3 for 12 hours after it brought 232 people to Reggio Calabria, on the south-western tip of the mainland.

Italian police questioned the boat’s captain for more than four hours, according to the NGO, and journalists aboard were asked to hand over video footage of the rescue operation, which took place on June 5.

Sea-Watch said police also questioned some of the rescued migrants who, after being processed by the authorities, are likely to end up in reception centres.

Sea-Watch said it requested help from the coastguard in Malta to send boats to aid the rescue mission but Malta refused.

German Chancellor Angela Merkel on Sunday called for an EU-wide border protection force, as well as joint asylum authority and collective standards for granting or refusing applications for protection.

“We need a real European border police that can act if necessary even if it displeases one of the (EU) states with external borders,” she said in an interview with ARD public television.

EU leaders in December had set an end-of-June deadline for an overhaul of rules to create a permanent mechanism to deal with migrants in the event of a new emergency.

The summer of 2016 saw a surge in mass drownings in the Mediterranean as Europe’s worst migration crisis since World War II peaked with hundreds of thousands of people fleeing war and poverty in the Middle East and elsewhere.