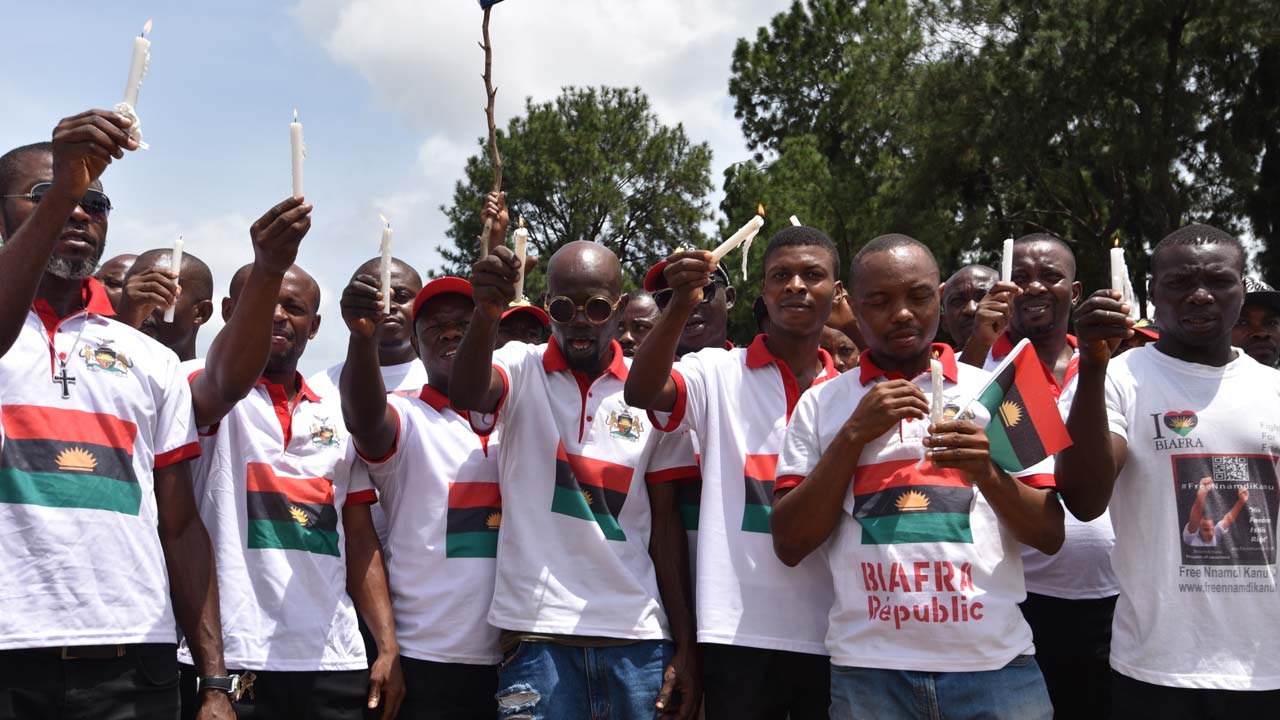 Onwuka, who addressed journalists in Enugu with members of his group, declared that the “interim government” which would run for 30 days beginning from today (August 1), is a prelude to the “full declaration of Biafra Republic on September 1

Onwuka, who addressed journalists in Enugu with members of his group, declared that the “interim government” which would run for 30 days beginning from today (August 1), is a prelude to the “full declaration of Biafra Republic on September 1, this year.”

He claimed he had secured the support of the United States (U.S.) to declare “Biafra and form government.” He named himself (Benjamin Onwuka) as the President and would go by the title Biafra Zionist President (BZP) and announced his would-be cabinet members, which shall include President-General of Ohanaeze Ndigbo, Chief Nnia Nwodo as Biafra Ambassador to the United Nations; Prof. Jerry Gana as Minister of Transportation; Prof. Patrick Utomi as Foreign Affairs Minister while Isreali would retain Defence, Internal Affairs and Agriculture as well as 25 per cent of the civil service positions in Biafra, among others.

However, Ohanaeze President, John Nwodo, told newsmen yesterday that he would not join issues with the group, but cautioned the agitators to be cautious of the way and manner they go about their agitation to avert crisis.

In another development, the Indigenous People of Biafra (IPOB) says it has given its unalloyed support to Yoruba Liberation Command (YOLICOM) and its declaration of July 27, 2017 that the Yoruba were tired of British contraption called Nigeria.

In a statement signed by its spokespersons, Emma Nmezu and Dr. Clifford Chukwuemeka Iroanya, the group said “the YOLICOM declaration was in line with the quest by IPOB for the restoration of the nation of Biafra through the instrumentality of a referendum mandated and supervised by the United Nations (UN).”

While supporting YOLICOM’s call on the UN to dissolve Nigeria and allow the constituent nations of Arewa, Oduduwa, and Biafra to go their separate ways, IPOB recalled that members of YOLICOM expressed dismay at the way the good people of Yoruba nation were denigrated in the past by some Biafrans.

Meanwhile, the Ugoani of Okpanam, His Royal Majesty Michael Mbanefo Ogbolu, has warned the agitators of IPOB to stay off Okpanam community, including seeking an audience with his palace for undisclosed reasons.

He said “my people have suffered enough in the hands of the defunct secessionist regime of Biafra during the Nigerian Civil War under the watchful eyes of late Chief Emeka Odumegwu-Ojukwu.”

The monarch stated this while reacting to the message by one Pastor Ikechukwu Ezechukwu, a pastor of a Pentecostal church in Okpanam, that Nnamdi Kanu, leader of IPOB, wants to visit his palace to propagate Biafra agenda.

Ogbolu recounted what the people of Okpanam lost in the person of late Major Chukwuma Kaduna Nzeogwu because of the civil war, stating that despite Nzeogwu’s contributions in Biafra, his efforts were never appreciated by Ojukwu