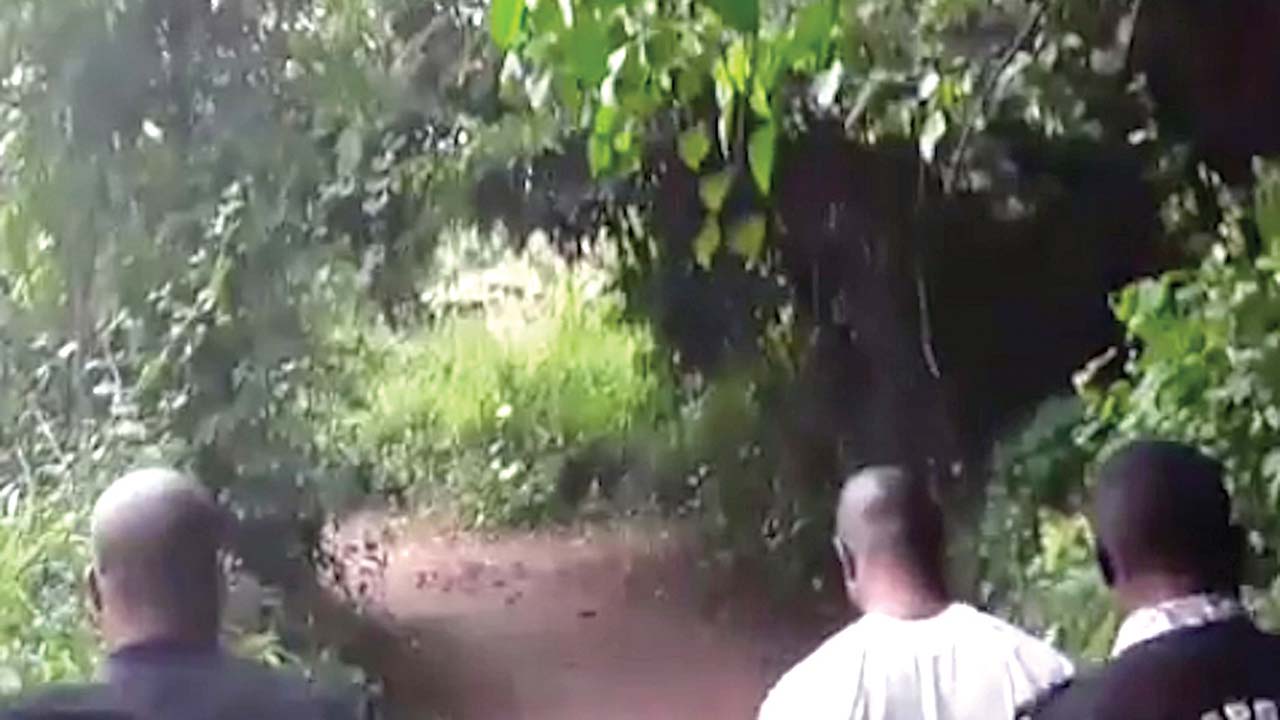 Inside the forest where the shrine with graves was discovered 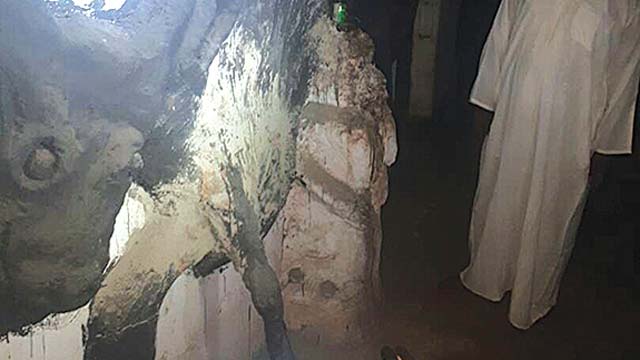 Following the gruesome murder of four family members at Ibeshe, Ikorodu on Sunday, the Lagos State Police Command has arrested the Baale of Ipakodo, a town on the outskirt of Ikorodu and the three others.

The command has also uncovered a shrine in the area believed to be the domain of the dreaded Badoo cult group. The operation, which was carried out in the early hours of yesterday, was led by Deputy Commissioner of Police in charge of operations, Imohinmi Edgal.

The police operatives also arrested the operator of the shrine, one Alhaji Alaka Abayomi. Other suspects arrested are Junior Christian and Owoyemi Bamidele.

A source said the Baale, Alhaji Tijani Awoyemi, was arrested for allowing his domain to be used as a den for ritual shrines. According to the source, “we have arrested the owner of the shrines in the thick forest of Agboowa, Ikorodu. We have also arrested three others, including the operator of the shrines. They are the major suspects in yesterday’s incident.

“The traditional rulers in Ikorodu area should know that their exalted office has privileges and responsibilities. They have subjects within their domain. They should compel their subjects to accommodate new people moving into their area. The activities of Badoo is an internal crime. No one would come from outside to wreck havoc in Ikorodu because the area has been cordoned off by the police.”

Some police operatives accused the Oba of Imota of opposing police plan to engage local vigilance groups in the area. “The Imota monarch is fond of attacking us and criticising us for using local vigilante and the Oodua Peoples’ Congress (OPC) to police the interior area and we are disappointed by this action,” the source said.

It was gathered that five graves were uncovered inside the shrine, with one of them freshly dug. Also sighted were baskets, broken eggs and other fetish items.

One of the cops who went on the operation claimed the shrine was one of the biggest in Ikorodu, adding that it belonged to Alhaji Abayomi. He said: “The shrine is situated on a large expense of land surrounded by thick bushes. We saw give graves. One of them looks fresh. We couldn’t enter some of the rooms because they had iron doors.”

This discovery came barely 24 hours after suspected members of the murderous gang killed a couple, Rotimi and Rita Adejare, as well as two of their children at Oke Ota in Ibeshe. It was gathered that the victims were discovered on Sunday afternoon when their church members came to check on them after they were not seen at the service

The command’s boss, Fatai Owoseni, reiterated his earlier warning to Lagos residents against living in isolated and unsafe areas where they might be vulnerable to attacks by hoodlums and cultists.

The Police Public Relations Officer, in Lagos, Olarinde Famous-Cole, said in a statement that the warning became necessary in view of hoodlums who might take advantage of such isolated areas to attack innocent people.

However, it was a lucky escape for pupils of a nursery and primary school in the Mushin area of Lagos as an 18-year-old boy, believed to be a member of the Badoo cult invaded the school. The suspect, armed with the logo of the cult on his left hand, allegedly entered the premises of the school with the intention to kidnap some pupils.

It was gathered that he allegedly stole some phones before he proceeded to attract the pupils. He was however caught by the security guard in the school and handed over to the police.

The suspect, Fred Minima, who resides at Akala area of Mushin, was charged before an Ebute Meta Magistrates’ Court in Lagos yesterday for allegedly belonging to a forbidden cult group, Badoo. He is facing three counts of attempted kidnap, belonging to an unlawful society and stealing. He pleaded not guilty to the charges.

The police prosecutor, Maria Dauda, insisted that the accused committed the offences on Wednesday, July 26 at 11:10a.m. at No. 25, Akinola Street, Mushin. The offences contravened sections 21, 42 and 287 of the Criminal Law of Lagos State, 2015 (Revised). The Section 287 stipulates three-year jail term for offenders, while kidnapping offences in Lagos attract a penalty of life imprisonment or capital punishment.

The magistrate, Mrs. O.O.A. Fowowe-Erusiafe, granted the accused bail in the sum of N50,000, with two sureties in like sum and adjourned the case till August 29 for mention.