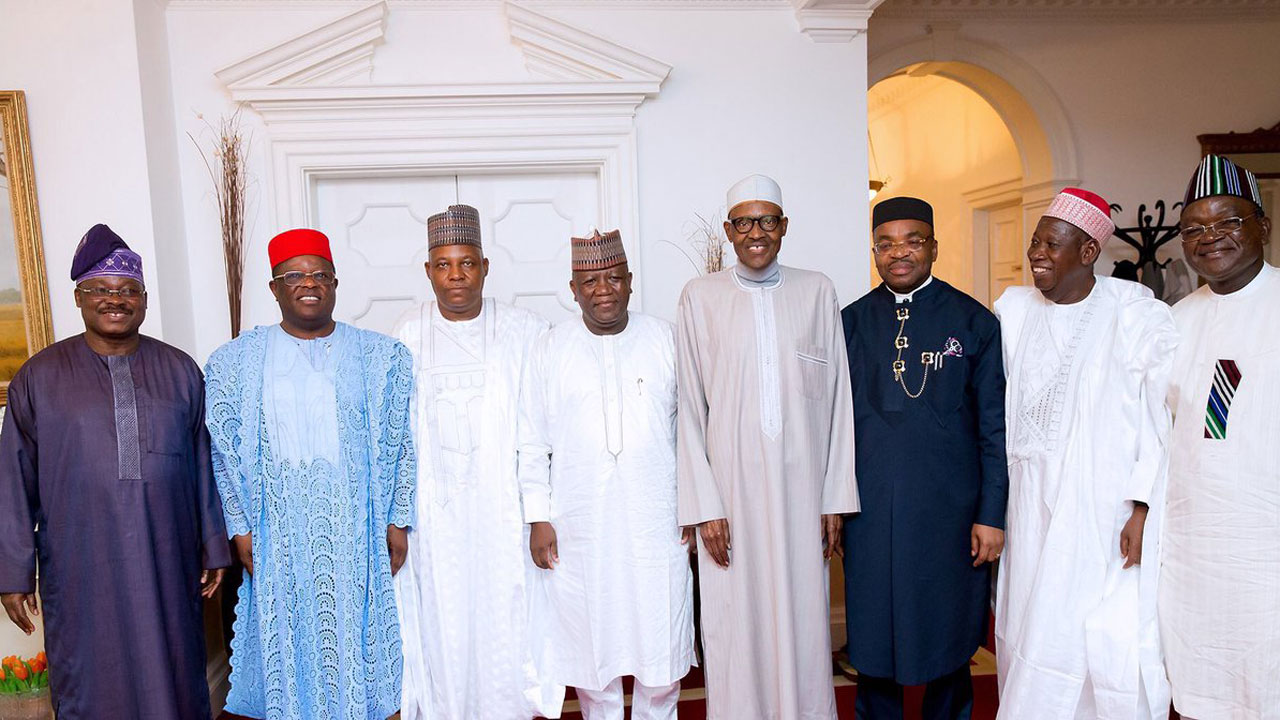 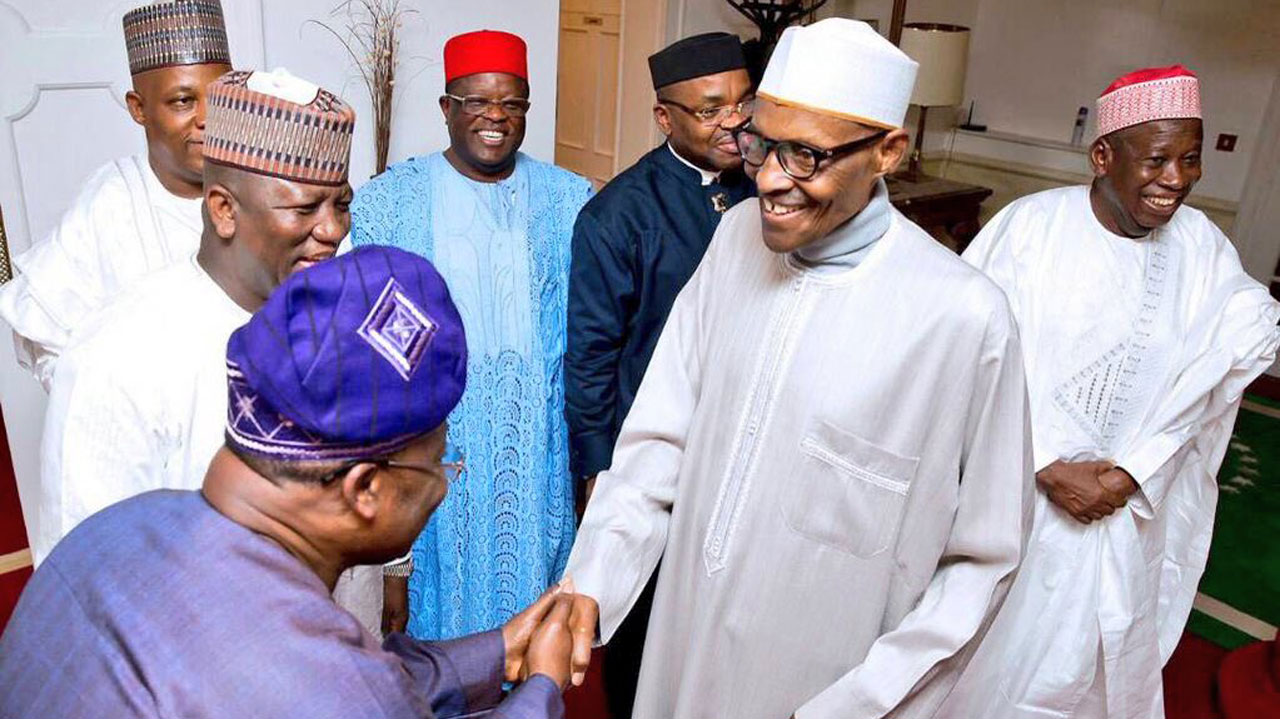 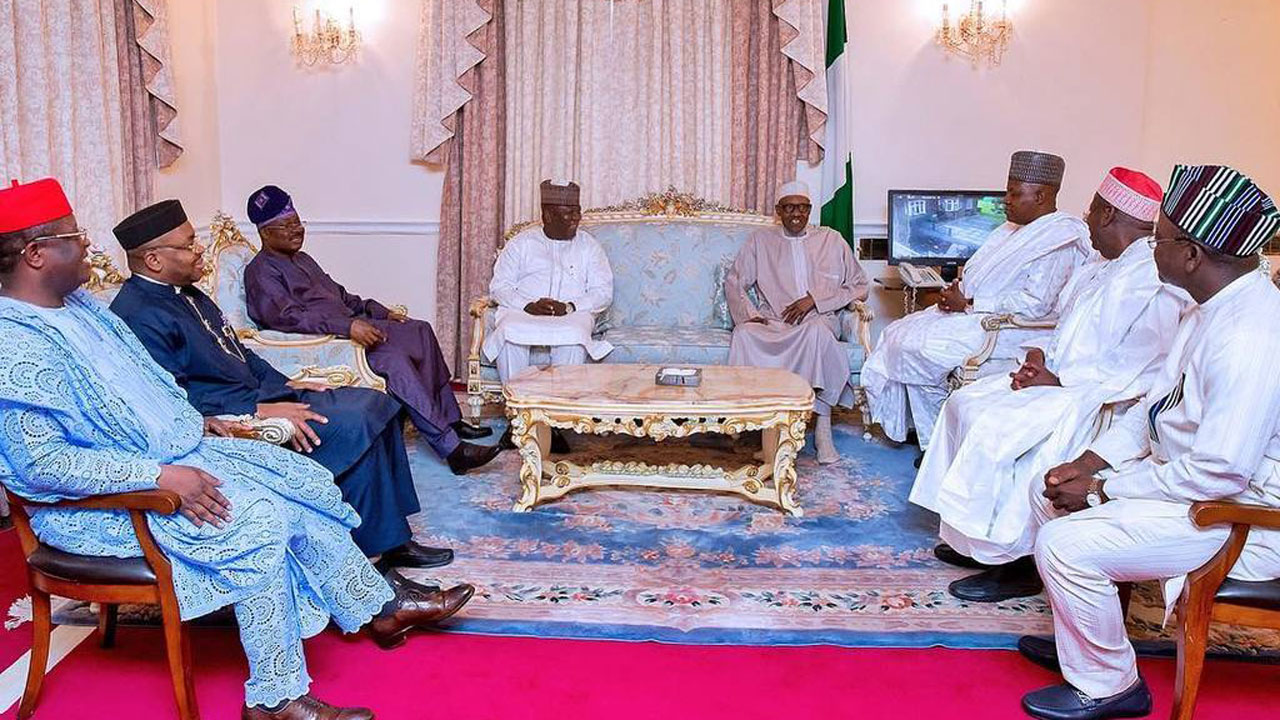 • Shielded from main building, kept in staff quarters
• Group flays spending on visits, another seeks medical panelThe six state governors who visited President Muhammadu Buhari yesterday at Abuja House, the official residence of the Nigerian High Commissioner to the United Kingdom, kept mum after meeting the ailing leader. The governors, who arrived around 2:50 p.m., left about an hour later, looking morose and refusing to utter a word when newsmen asked for the outcome of their meeting with Buhari.

They deliberately parked their vehicles at the entrance of the house to prevent newsmen from seeing who was seeing them off, but it was still possible to observe that, though they were smiling with the president’s aides as they came out of the house, the president was conspicuously absent from the door to see the governors off.

Prior to their visit, a bouquet of flowers and a get-well-soon card addressed to “Mr. President” was delivered by a courier around 11:45 a.m.Asked who sent it, the courier refused to give details of the sender. “Sorry, l cannot tell you,” he replied. But The Guardian discovered the sender was one Mohammed Bagangida, whose goodwill message was “Get well soon, from your son- Mohammed Babangida.”

When asked which Babangida it was that sent the card and flowers, the courier also declined to give details, saying he was only asked to deliver the message. “I don’t know,” he said.The six state chief executives who visited Buhari included Samuel Ortom (Benue), Abiola Ajimobi (Oyo), Abdulaziz Yari (Zamfara) and their Akwa Ibom counterpart, Emmanuel Udom, who wore a purple Agbada (flowing gown).

All of them arrived in a convoy of three vehicles, with Ajimobi and Yari sitting together in the one that got in last. Interestingly, they swapped vehicles on the way out, as Ortom and Ajimobi sat together while leaving. The visit itself appeared secretive and a bit odd, as the governors did not go into the main house to see the president on arrival. Rather, they all went into the adjacent building, the staff quarters. They were there for about 15 minutes before proceeding to see the president in the main building. Why they did that wasn’t clear, but it could be that they had to be briefed on what they were allowed to say afterward.

As the visitors drove out at 3:50 p.m., The Guardian asked questions through the window and even banged on the SUV carrying Ortom and Ajimobi, but none of them responded. When Ortom was specifically asked if the president was coming back home within two weeks, he kept sealed lips as the driver zoomed off. Others in the entourage were also asked; “did you see the president? Is the president okay?” but they did not respond.

Meanwhile, a pro-democracy and non-governmental organisation, Human Rights Writers Association of Nigeria (HURIWA) has condemned as wasteful the series of lunch meetings between governors and the ailing Buhari in London.

It also lambasted the Senate for allegedly wasting the historic opportunity of introducing reform-minded provisions into the constitution such as devolution of powers to the federating units, restructuring and resource control by voting against these amendments.

HURIWA, in a statement by the National Coordinator, Emmanuel Onwubiko in Abuja yesterday lamented that the Federal Government under the current administration is actively encouraging medical tourism of top officials to the United Kingdom at grave costs to the public treasury by these stylish dinner/lunch meetings at the behest of the presidency.

On the decision of Buhari to invite governors in batches to visit him in London at huge public costs, HURIWA dismissed the bonanza as unwise and a disservice to the mantra of good governance and prudence in the handling of public fund.

The group said it would have been cheaper for the president in London to address the media and pass his message to Nigerians since two or three major Nigeria-funded media houses, including the Nigerian Television Authority (NTA), News Agency of Nigeria (NAN) and the Voice of Nigeria (VON) maintain offices in the United Kingdom and are watched by significant percentage of the people of Nigeria.

Another group, United Global Resolve for Peace (UGRFP), called for the setting up of a medical committee to ascertain the fitness of President Buhari, even as it threatened to go to court on whether he is fit enough to continue in office. The group said it had already written letters to the Acting President, Yemi Osinbajo, the Attorney-General of the Federation (AGF) and Minister of Justice, Mr. Abubakar Malami and the Acting Secretary to Government of the Federation (SGF), Habibat Lawal, to set up the medical team in line with Section 145 of the 1999 Constitution as amended.

Speaking at a press briefing on behalf of the group, Pelumi Olajengbesi in Abuja yesterday said: “We have written letters to the Acting President, the AGF and the SGF to set up a medical committee to ascertain if Buhari is fit enough to continue in office.“This is not about the president or anybody, but the nation called Nigeria. We need to follow what the constitution says and ensure that the right thing is done. We are giving them two weeks.

“If they fail to do that and set up the committee, we will be left with no choice, but to approach the court and compel them to do the right thing. They need to invoke that section of our constitution.”The Executive Director of the group, Olaseni Shalom, who also spoke, blamed the current ethnic tensions on the continuous absence of President Buhari.

Shalom said: “A fundamental factor that has the capacity to undermine the peace is the prolonged absence of President Buhari. “While we are sympathetic to Buhari’s health challenges, we are also convinced that his continued absence from the country would further lead to the degeneration of an already bad situation.

“We therefore urge the hierarchy of government to do what is needful, what is right and just and what the constitution of the Federal Republic of Nigeria requires.”