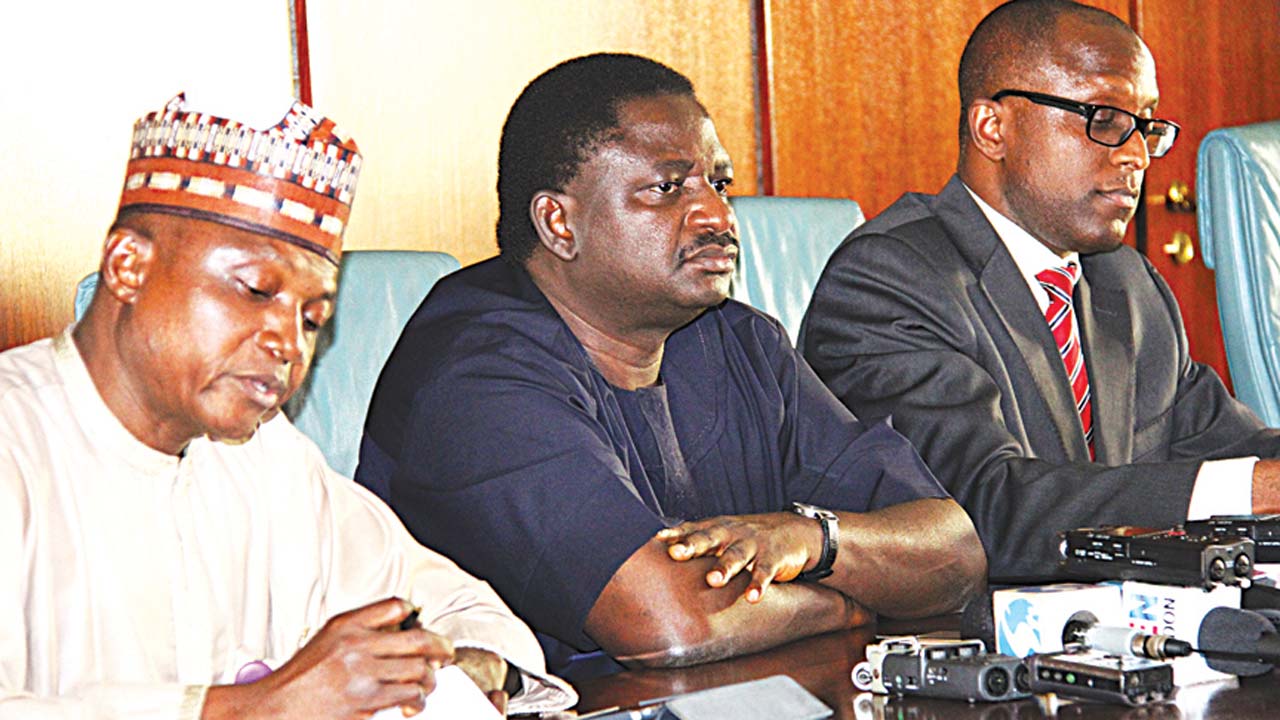 Media and Publicity Advisers to the President, Mallam Garba Shehu (left); Femi Adeshina and Senior Special Assistant to the Vice President on Media and communication, Laolu Akande briefing the State House correspondents on the planned visit of another delegation of state governors to President Muhammadu Buhari  in London today in Abuja…yesterday. PHOTO: PHILIP OJISUA

The Governor of Zamfara State, and Chairman of the Nigerian Governors Forum (NGF), Abdullaziz Yari and six others departed the country yesterday on “a goodwill visit” to President Muhammadu Buhari in London today.

President Buhari’s personal photographer, Bayo Omoboriwo is also expected to be on the entourage. The five All Progressives Congress (APC) and two opposition Peoples Democratic Party (PDP) governors are to represent the six geopolitical zones of the country at the instance of the NGF.

Briefing State House correspondents on the visit‎, Special Adviser to the President on Media and Publicity, Femi Adesina who was joined by his colleagues Garba Shehu and Laolu Akande, both Senior Special spokesmen in the presidency, said the visit was a follow-up to the one by Governor Okorocha.

On why Governor Ayo Fayose is not part of the delegation, Adesina in a terse response explained that the selection “was done by the governors forum.” On why the President has failed to address Nigerians via a broadcast, Mallam Shehu said :”It is a question of what he prefers and this is what he prefers for now.

He would rather receive that delegation and that is what is happening. If the president opts for an address he will do it.”

Meanwhile, at Abuja House, the official house of the Nigerian high commissioner to the Court of St. James’s, aides of the president and staff of the embassy occasionally moved around the building , discussing in groups yesterday.

Calls of “excuse me sir, is the president returning soon and how’s the president?” were not answered. However, one responded briefly after waving down the car driving him out of the property around 2:00p.m. When asked “how’s the president?” He replied “He’s doing well, he’s okay, “ before asking: “which media house are you from?”

Another aide who spoke with The Guardian through the gate, told the reporter to go through the proper channel. “Go to the embassy or the media head” – making reference to the president’s special assistant on media, Femi Adesina.

When told that they had no information concerning the president’s situation and then asked if the president would be returning within a fortnight, he said: “You know there are things that should not come from me, you have to go through them.”