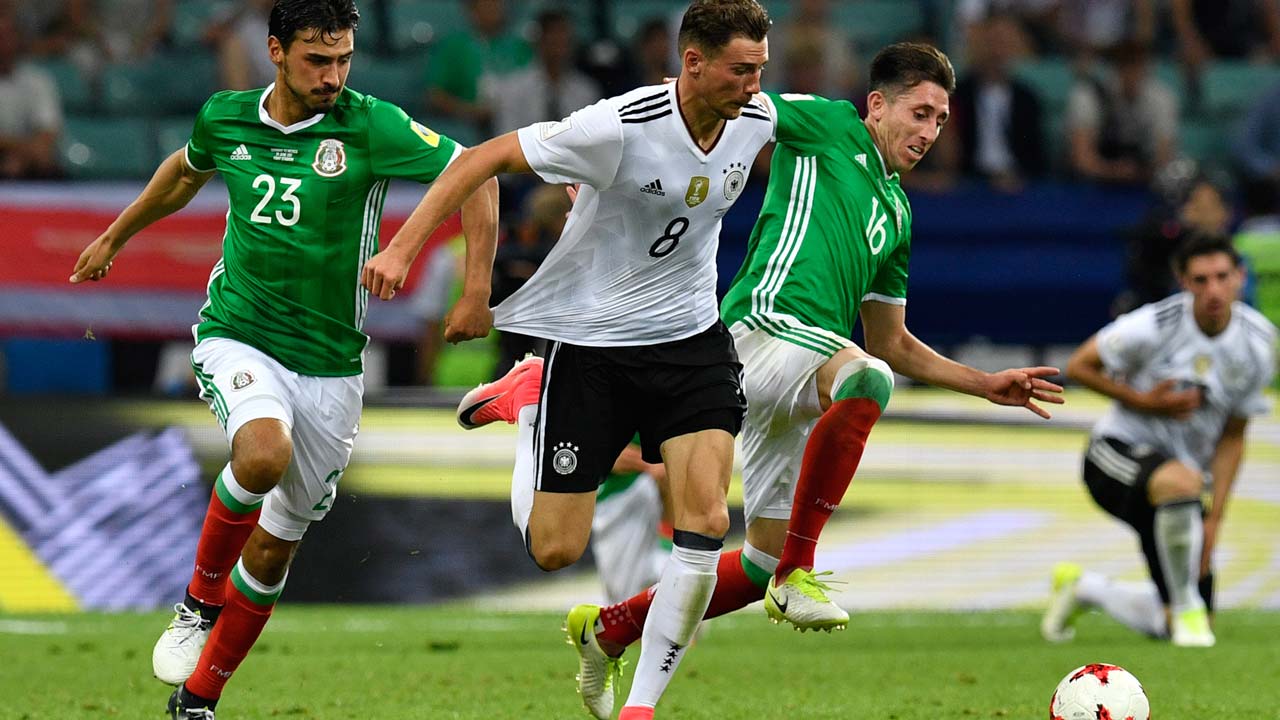 Germany booked their place in the Confederations Cup final as Leon Goretzka scored twice in a devastating opening spell to Thursday’s 4-1 semi-final win over Mexico.

Attacking midfielder Goretzka ran riot in Sochi with goals on six and eight minutes before Timo Werner and substitute Amin Younes netted in the second half.

Goretzka and Werner are now the tournament’s joint top-scorers with three goals a-piece in Russia.

Germany head coach Joachim Loew pulled a surprise before kick-off by naming 20-year-old Benjamin Henrichs on the right wing for only his third international and first start in Russia.

The bold move paid off as Henrichs pounced on an early mistake and his pass found Goretzka sprinting towards the box.

The Schalke forward took the ball in his stride and stroked his shot past Mexico goalkeeper Guillermo Ochoa on six minutes.

The early goals sparked life into comeback kings Mexico, who fought back in all three group stage matches to beat New Zealand and Russia after scrambling a draw with Portugal.

When Germany captain Julian Draxler was caught napping on the edge of the area, Dos Santos robbed him of possession, but fired just wide.

LA Galaxy’s Dos Santos and his Villarreal namesake Jonathan Dos Santos forced Germany goalkeeper Marc-Andre ter Stegen into a double save with half an hour gone.

Mexico sustained the pressure and Hector Herrera’s free-kick had to be tipped over the bar by Ter Stegen.

It stayed 2-0 at the break, but Mexico had 62 percent possession in the first half and 10 shots to Germany’s five.

The world champions tightened their defence accordingly for the second half and Ter Stegen was rock-solid in denying Mexico’s half-chances.

It was three shortly before the hour mark when Draxler’s pass into the area found Jonas Hector, who drew Ochoa for Werner to tap home for his third goal in Russia after Sunday’s double against Cameroon.

Goretzka was replaced by Liverpool midfielder Emre Can for the final 23 minutes as Loew rested him for Sunday’s final.

With 15 minutes left, Raul Jimenez headed against the crossbar with Ter Stegen beaten.

There was nothing on when Fabian stepped up for a free-kick just inside the German half, but his strike rocketed into the top corner.

The Germans were briefly rattled, but replacement Younes settled any nerves with a fourth goal in injury-time.