Warning: session_start() expects parameter 1 to be array, string given in /home/platform/public_html/wp-includes/class-wp-hook.php on line 287
 Jay-Z Sorry For Cheating, Says He Loves Gay Mom
Skip to content 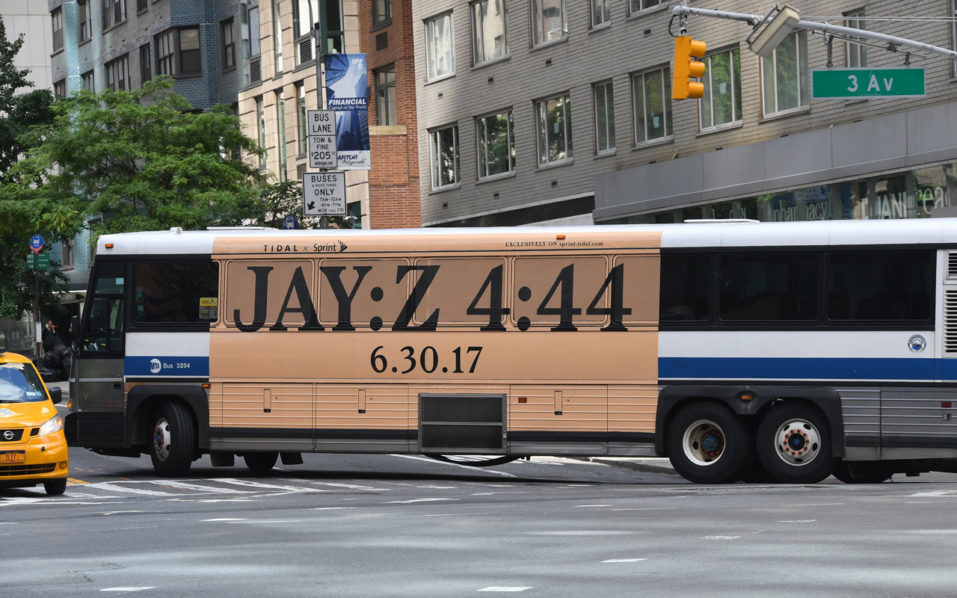 In this photo taken June 26, 2017, a New York City bus with an advertisement for Jay-Z’s anticipated new album “4:44” turns a corner in midtown New York City. Earlier this week, Jay-Z announced that official listening parties will take place across the US on June 29. Guest hosts will play the album in specific Sprint stores located in New York, Los Angeles, Atlanta, and more ahead of its June 30 release. / AFP PHOTO / TIMOTHY A. CLARY

Jay-Z’s jaunty anthems made him one of rap’s all-time greats and then, as he amassed a business empire and married fellow superstar Beyonce, he drew an ever thicker curtain over his private life.

Releasing an album after a four-year gap, Jay-Z has bared himself like rarely before. He apologizes to Beyonce for cheating and pours out love for his mother whom he reveals to be lesbian, all while taking familiar but timely shots on the politics of race.

“4:44,” the 13th studio album by the rapper born as Shawn Carter, came out Friday as an exclusive on his upstart Tidal streaming service whose new part-owners, telecom provider Sprint, is banking on the release to woo customers.

Jay-Z — who, apparently energized on punctuation, has restored his name’s hyphen — delivers a long-awaited public reply to Beyonce who chastised him for infidelity on her acclaimed “Lemonade” album a year ago.

“I apologize / Our love was one for the ages and I contained us,” Jay-Z raps over a brassy Gospel refrain.

“What good is a menage-a-trois when you have a soulmate? You risked that for Blue?” he asks rhetorically, referring to the couple’s five-year-old daughter Blue Ivy.

Beyonce recently gave birth to twins, her father revealed on social media, although the family has yet to confirm details. Jay-Z on “4:44” suggests they conceived the twins naturally.

Jay-Z, discussing the album on iHeartRadio, said “4:44” was named for the time of morning when he woke up and wrote the song. He and Beyonce have matching ring-finger tattoos of the Roman numeral “IV” — four being the day in different months of their wedding and both their birthdays.

Embracing lesbian mother
Jay-Z, who recently became the first rapper to be inducted into the Songwriters Hall of Fame, infuses the album with touches of house music and reggae, giving a sleeker, contemporary sound to the artist whose later albums had veered into mainstream pop.

On the soulful “Smile,” Jay-Z for the first time confirms hushed rumors that his mother is lesbian, explaining how she turned to substances to cope with the stigma.

“Mama had four kids but she’s a lesbian / Had to pretend so long, that she’s a thespian,” raps Jay-Z, who has spoken of how his father’s absence contributed to his troubled youth in public housing in Brooklyn.

“Don’t matter to me if it’s a him or her / I just want to see you smile through all the hate,” he raps.

“Smile” opens with a snippet from Stevie Wonder and closes with a poem by Jay-Z’s mother, Gloria Carter, who recites, “The world is changing and they say it’s time to be free / But you live with the fear of just being me.”

Jay-Z, like many rappers of his generation, employed homophobic slurs in his early music but was also one of the first prominent voices in hip-hop to speak out in favor of gay rights.

Harsh words on Prince estate
Jay-Z, who alongside Beyonce campaigned for and became friends with former president Barack Obama, takes on race relations on “The Story of O.J.” and “Moonlight” as he concludes that African Americans will invariably be judged by their color.

“We stuck in La La Land / Even when we win, we gonna lose,” he quips about this year’s Oscars mix-up in announcing best picture.

Jay-Z elsewhere throws veiled barbs at other rappers including onetime protege Kanye West, who last year ranted against Jay-Z and in support of then president-elect Donald Trump before entering a hospital.

Jay-Z has especially harsh words for the estate of pop icon Prince, a longtime rebel in the music industry who had signed a deal with Tidal shortly before his death.

The rapper denounces the “greedy bastards” who have commercialized Prince with moves such as bringing his catalog onto leading streaming service Spotify.

“I’m surprised you ain’t auctioned off the casket,” Jay-Z inveighs.

But Jay-Z’s mind on “4:44” is more on his own “legacy” — which is the title of the last song in which the 47-year-old addresses his children, vowing that the family’s fortune and philanthropy will outlive him.

“I’d like to see a nice peace fund / Ideas for people who look like we / We going to start a society within a society.”