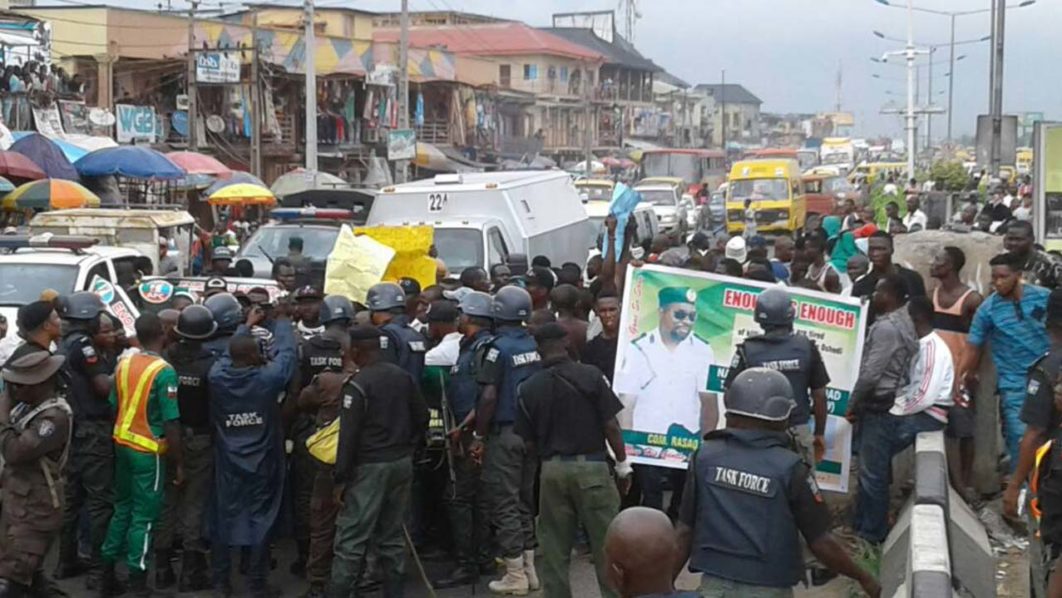 Policemen with the protesters at Oshodi

• Group calls for independent probe into Hamburger’s death
The three gladiators in the National Union of Road Transport Workers (NURTW) Oshodi factional clash have been arrested by officers of the Governor’s Task Force yesterday.

The notorious suspects, popularly called Taloo, Alayoo and Ijee were arrested by the Olayinka Egbeyemi-led task force, following a prolonged crisis that has rocked Mafolukwu and other parts of Oshodi after the killing of the chairman of tricycle operators in the area, Chief Aro Razak Bello, popularly known as Hamburger.

The Lagos State government has also assured members of the public of safety of lives and property around Mafoluku, Shogunle, Sadiku, Ladipo and the entire Oshodi area of the state.

Egbeyemi disclosed that activities of the NURTW officials across the entire Oshodi area is presently under the control of the state’s task force and other security agencies who were strategically positioned for the maintenance of peace and order.

“The different warring factional leaders of the NURTW and Road Transport Employers Association of Nigeria (RTEAN) trying to foment trouble around Mafoluku, Shogunle, Sadiku, Ladipo and Oshodi with their supporters have been arrested and are presently being interrogated by the Lagos State police boss, Mr. Fatai Owoseni,” he said.

Egbeyemi further enjoined members of the public to ignore misinformation about ‘Bomb Explosion’ and ‘Security Alert’ around Shogunle and Oshodi trending on various social media, thereby creating unnecessary fear among traders and residents of the area.

He warned miscreants and hoodlums to desist from causing chaos around Oshodi and the entire parts of the state as anyone arrested would be immediately charged to court for prosecution.

Meanwhile, a group, Oshodi Collectives (OC) has appealed to the Lagos State government and the Inspector General of Police, Mr. Ibrahim Idris, to expedite action in investigating and subsequently arresting those responsible for the death of 49-year old chairman of the Lagos State Motorcycles Owners Association in Oshodi, Chief Aro Bello.

Hamburger was killed last Monday in the aftermath of the violence that broke out in Shogunle, Oshodi during the All Progressives Congress (APC) Councillorship primaries. He was buried on Friday, June 2, amid fears of reprisal attack from loyalists of the warring factions.

The group had accused a top official of the Oshodi branch of NURTW of being behind the killing of Hamburger. The official has also been accused of keeping a killer squad in the community.

According to OC, the NURTW official had always boasted of being highly connected in Lagos State and that he has the backing of the APC leader.The group, therefore, called on the IGP to send investigators from Abuja to conduct an independent investigation into the murder of Hamburger and others, “because this NURTW official has always boasted that nothing would come out of any investigation conducted by the police in Lagos.”